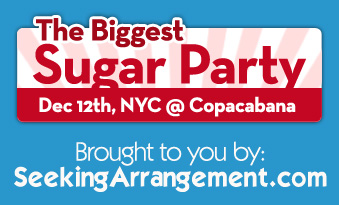 December 12, 2011 — The Next SeekingArrangement.com Party

Due to popular demand, we’ll be throwing yet another Sugar Daddy Party in New York City on December 12, 2011.  For more information about our Holiday Sugar Daddy party, please visit SeekingArrangementParty.com where you can buy tickets!  Like our last event, this one will be held at The Copacabana nightclub — this time it will be on their rooftop!  And while I could not make the last party due to me missing my flight connection in Frankfurt, this time around I will be there.  So if you are attending, be sure to say hello to me on December 12.

In 2012, we have big plans for our  Sugar Daddy parties.  We are currently working on planning our first London Sugar Daddy party which will be held between March – May, 2012.  That will quickly be followed by a party in Los Angeles, Miami and Toronto.

We are sending TWO Sugar Babies to London…

For the London party, we are looking to send two beautiful and lucky Sugar Babies from the United States to represent us. (This will include 2 round trip airline tickets from New York to London, hotel, transportation, and of course tickets to our London party.) To qualify for the drawing to represent us, you MUST attend the December 12 party in New York, and bring a friend of yours with you.  Both of you should submit a written essay about why you should be picked to represent SeekingArrangement.com in London.  You can either send me your essay to brandon (at) seekingarrangement.com or hand your essay to me when you see me on December 12!

With almost 50,000 registered members from the United Kingdom, and London being our largest city outside of the United States, the sugar daddy and sugar baby scene is ripe for an explosion in Britain. And while most people may think the Brits are more conservative than their American counterparts, it appears not to be the case.  British Sugar Daddies are already well verse in the art of chivalry and how to be a gentlemen, and British Sugar Babies do certainly know how to have lots of fun.  Personally, I believe the art of being a Sugar Daddy and a Sugar Baby is already deeply ingrained in the British culture.

If you are a Sugar Daddy or Sugar Baby from the United Kingdom, do introduce yourself to the sugar family.

If you are an American, have you been contacted by a Sugar Daddy or Sugar Baby from the UK?

Would you ever consider a trans-Atlantic sugar relationship?