2 years ago
“Pretty Woman” The Musical: A Lesson for Sugar Babies

I watched the movie “Pretty Woman” back when I was a Sophomore at MIT. I had forgotten about it and its relevance to the Sugar community until this past weekend when I went to Manhattan with my girlfriend, Zoe.  As usual, every time I have a chance to be in the Big Apple, I ask Zoe which Broadway show she wants to watch. We had seen ‘Hamilton’ the last time we were in the city, so naturally we felt like seeing something a little less serious. So when Zoe suggested “Pretty Woman,” I was all game.

While the New York Times did not give “Pretty Woman, The Musical” much of a rave review, we thoroughly enjoyed the performance.  There is no doubt “Pretty Woman” dealt with a difficult and socially uncomfortable topic. Another challenge it faced was the fact that the original movie and its strong lead characters (Richard Gere and Julia Roberts) were tough acts to follow. Yet, despite everything stacked against it, the cast delivered a powerful performance that was extremely entertaining and highly relatable to all of us in the Sugar community.

Naturally, there are a number of important lessons to be learned from the show. 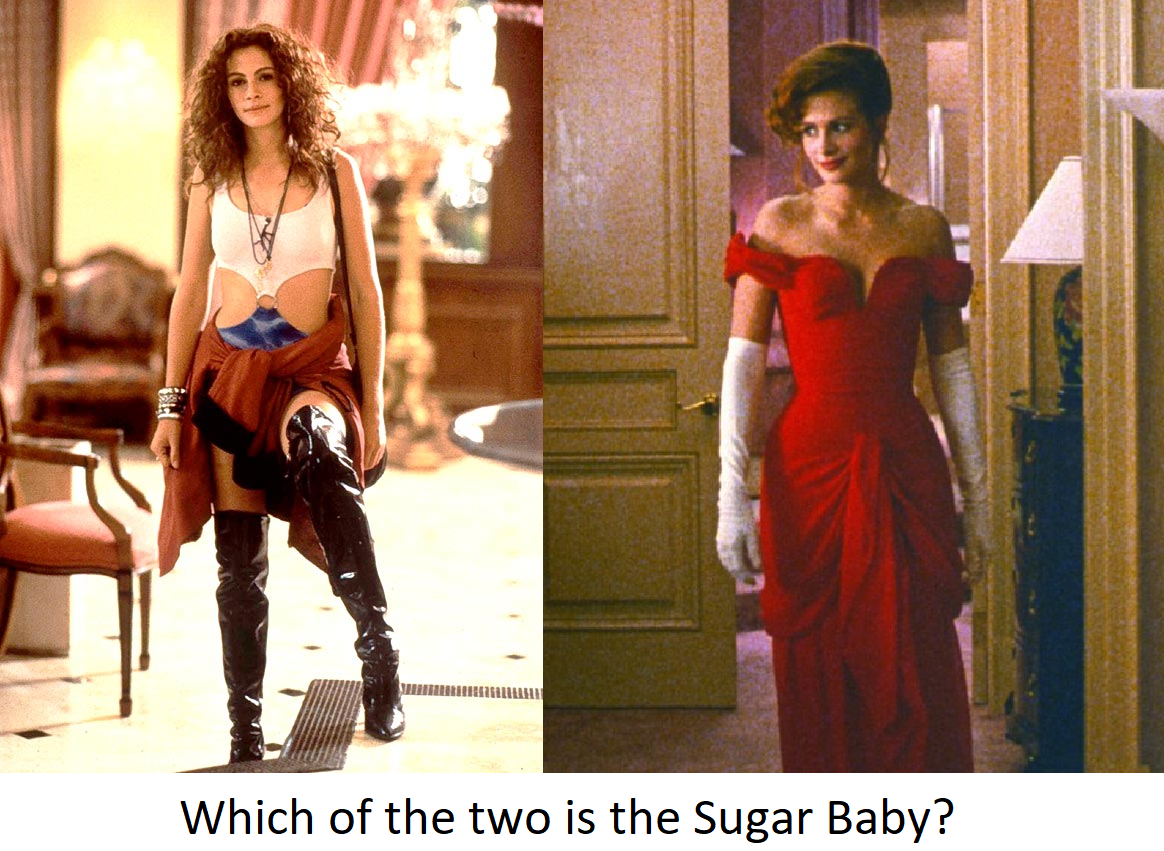 Lesson 1:  Be a sugar baby, not a prostitute.

Reporters often ask me the question, “What is the difference between a Sugar Baby and a prostitute?” If there is one lesson to be learned from “Pretty Woman,” it would be the answer to that question.  Vivian was a prostitute at the beginning of the movie but became a Sugar Baby by the end. It wasn’t because she had experienced the luxurious lifestyle of being the girlfriend of a billionaire that changed her.  Rather, it was his kindness and desire to form a genuine connection with her when few would. She’s initially abrasive and cynical because that’s what the world taught her. The chance encounter with Edward, his money and the luxury he was able to afford were all gateways to forming a genuine connection since she valued money greatly.  But it was the genuine connection they had that changed her. After that, she could never go back to being a prostitute. She saw life from a new perspective and had transformed herself from a simpleton into a Sugar Baby. The difference between the two couldn’t be clearer. The contrast between the two could not be more black and white.  The desire of wanting to form and keep a genuine relationship is the defining quality separating out Sugar Dating from prostitution.

Lesson 2:  It is okay to want a Fairy-tale ending.

At the end of their week together, Edward, the billionaire, made an offer to Vivian.  He offered her a new car, an apartment, and an allowance. Vivian rejected his offer to be his kept woman.  While most would jump at that opportunity, and she may have also had it been made a week ago, but she no longer wanted that.  She wanted her fairy-tale, and she taught us all that it is okay to want more. By the end of the show, she had transformed herself into the ultimate Sugar Baby, following the footsteps of many like her, such as Melania Trump, Eloise Broady, Kristy Hinze, Katsia Zingarevich or Jade Forest. Strong women who have incredibly high standards for the lifestyle they want to live, know exactly what they want and have been successful in upgrading their relationships.

So, if a reporter were to ask me again if a Sugar Baby is a kept woman, I would have to ask them to watch the ending of “Pretty Woman”.  A kept woman may certainly be a Sugar Baby, but a Sugar Baby is most certainly not always a kept woman. Some Sugar Babies are girlfriends of successful men or wives of Presidents or billionaires.  Most Sugar Babies, however, are single and looking, but they know what they want, and they have a high standard for whom they want to be in a relationship with. They aren’t afraid of seeking their fairy-tale.

Lesson 3:  It is important to have a dream.

There are many critics for those of us who live the Sugar lifestyle.  Many are usually sour because they aren’t rich enough to be Sugar Daddies, or they feel they aren’t beautiful enough to be Sugar Babies.  Yet, there is one more important lesson to take away from “Pretty Woman”. A lesson that will benefit everyone, including those naysayers.

The song, “Never Give Up On A Dream”, sang towards the end of the performance tells us of the importance of having dreams. In that scene, Vivian’s roommate who had been a prostitute for years, but was not as lucky as Vivian in love, decided it was time to pursue the dream she had when she was young.  She signed up with the police academy and started to pursue her dreams of a career in law enforcement.

Dreams lead to actions, and taking action leads to dreams coming true.  And hence the importance of never giving up on one’s dreams.

For those critics who fret because they are not rich or pretty enough, l will say that I was neither rich nor successful nor beautiful 20 years ago when I was struggling with shyness and loneliness.  Yet, my dreams eventually led me to where I am today. Confidence, success, personality and even physical beauty can all be changed and improved, if only one sets their mind to it.

Even though I found some of the casting choices to be puzzling (for example, Andy Karl, who clearly spends a lot of his time at the gym, playing the role of Edward who clearly had no time for anything else other than business and work), I highly recommend “Pretty Woman, The Musical” for those who may have the opportunity to watch it.

So next time, if you happen to be in New York and you are lonely or bored, get on SeekingArrangement. Find yourself a date and buy two tickets to the show.  At the end of the show, let’s not forget to share some sugar with those in need by donating to Broadway Cares, the charity that fights HIV/AIDS. I’m sure you won’t regret any of it.

For those of you who have questions for me, or who are interested in following me on my journey to improving my life, relationships and business, feel free to follow me or write me on one of my social channels:

83 Responses to ““Pretty Woman” The Musical: A Lesson for Sugar Babies”
Leave a Reply

© 2021 SeekingArrangement.com in conjunction with W8 Tech Limited and its related companies.